Human heart is arranged in three layers known as pericardium, myocardium and endocardium. The main layer we are concerned with it is the Myocardium because it consists of cardiac muscle which makes the heart beat act as an effective pump that circulates blood in our body. 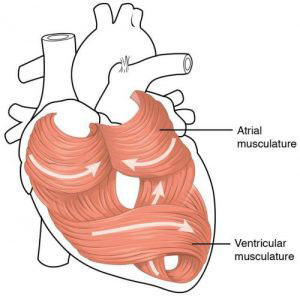 The heart muscles need constant supply of oxygen and necessary nutrients to survive. In heart, this function is carried out by the coronary arteries which supply oxygen rich blood, nutrients and transport back carbon dioxide and other waste materials into the venous circulation. 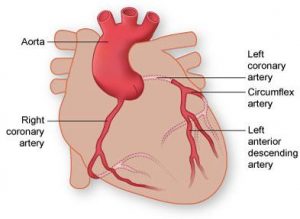 These arteries branch into smaller and smaller blood vessels until they become very tiny in size(capillaries) from where oxygen/carbon dioxide exchange can occur with the heart muscle.

The inner lining of blood vessels is made up of a layer of cells known as the endothelium. 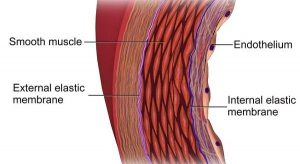 When blood flow is turbulent such as in High Blood Pressure, or in places where the coronary blood vessels branch out, endothelial cells get damaged. Usually they get repaired normally in healthy persons. Risk factors like Diabetes, Smoking, High Blood Cholesterol, High Blood Pressure disturb the normal function of these endothelial cells. These abnormal cells encourage certain blood cells known as platelets to stick to their surface and form a clot which acts as a place where more fat cells keep on depositing. Eventually a complex with clot, fat cells, large smooth muscles cells and blood cells like Monocytes form in the vessel wall and blocks the blood flow to a small or big part of the heart. 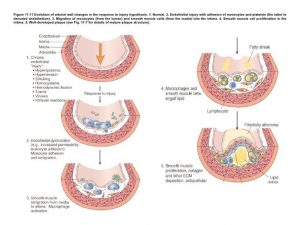 The above process of atherosclerosis is accompanied by calcium mineral deposition. This process is known as calcification which we can measure radiographically using tests such as the Coronary Artery Calcium Score. The characterization of coronary-artery calcification by computed tomography shows equivalence with the total coronary atherosclerosis load and the risk of cardiovascular events [3]. Basically it means that Coronary Artery Calcium Score can detect the amount of atherosclerotic plaque buildup and can predict the risk of complications.

It’s all about supply and demand 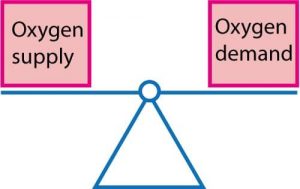 Physical activities like running, walking uphill require more oxygen and the workload of heart is increased as heart has to pump more blood, to do this heart itself needs more oxygen via Coronary arteries. When branches of coronary artery such as the epicardial arteries get their diameter reduced by 50%, the demand of heart muscles cannot be met, at around 80% reduction in diameter, the normal demand of the heart muscle(myocardium) cannot be met even while a person is at rest. As a result, the myocardial cells slowly begin to die due to lack of blood supply, through a process known as myocardial ischemia. Or the plaque can get dislodged and may block the artery completely. This is the stage when a person exhibits classical signs and symptoms.

All of the conditions arising due to Coronary Heart Disease share common initial symptoms such as:

A partial obstruction can cause reversible ischemia, where symptoms appear on physical exertion and symptoms disappear after blood supply is resumed after a person rests for a certain period of time or takes medication such as Nitroglycerin. This is known as Angina. The portion of myocardium affected may heal partially and become fibrotic over time.

If the symptoms of angina occur even while the person is at rest or the chest pain increases in severity than the previous episodes, or it is not responding to medication such as nitroglycerin then this condition is known as Unstable Angina. If this occurs call 911 immediately or ask for help.

A complete obstruction may cause the death of myocardial cells (“necrosis”). This condition is known as heart attack aka Myocardial Infarction (M.I).

Subsequently this may lead to failure of heart to act as a pump resulting in condition known as Heart Failure.

The heart beat is tightly regulated by the electrical pathway of the heart. If it gets affected. It may lead to irregular contraction of heart muscles known as Cardiac Arrhythmia due to which blood supply to the brain may be completely lost and the person may die due to condition known as Sudden Cardiac Death.

4. How is coronary artery disease diagnosed?

Electrical activity of the heart is tested by placing electrodes on various parts of the chest, the absence of or abnormal electrical activity can be detected and furthermore, the area affected maybe pinpointed to know which coronary artery is affected and to prepare the patient for subsequent intervention.

When cardiac muscles die they release their content into the blood, we can detect these chemical compounds in the laboratory which can be used initially to screen for acute coronary syndromes and later as a marker for healing/repair.

Using sound waves, the heart and its structure is directly visualized by a cardiologist.

A narrow tube maybe inserted into the coronary arteries and dye injected to find out which artery is affected, at the same time a device known as stent can also be placed to relieve the obstruction in the affected coronary blood vessel.

Tests such as Technetium Scan, Gadolinium enhanced MRI can be done to detect the infarct (dead part of heart muscle). Additional test such as Coronary Calcium Scoring using Computed Tomography provides information about the presence, location and extent of calcified plaque in the coronary arteries.

We offer Coronary Artery Disease diagnostics at our locations in Albuquerque, Santa Fe or Alamogordo. Visit one of our imaging centers at Alamogordo Imaging Center, El Camino Imaging Center ( Albuquerque ) and X-Ray Associates at Santa Fe. for more information.

Either physical using the treadmill (TMT test), stationary bike or either chemical using Dobutamine, doctors may try to reproduce the symptoms or ECG changes at the laboratory by stimulating the heart to identify Coronary Artery Disease. Additionally, radionuclides can be also used for this purpose.

Additionally, the doctor may order the following additional tests to check for risk factors:

Urine to check for Diseases related to Kidney and for Diabetes Mellitus
Blood for cholesterol (HDL, LDL, triglycerides) and blood glucose

5. How can coronary artery disease Almagordo, Albuquerque be prevented?

According to physical activity guideline recommended in the 2013 American College of Cardiology and American Heart Association on life style management to reduce cardiovascular risk, the recommended guidelines for exercise is :

Aerobic activity should be performed in episodes of at least 10 min, preferably spread throughout the week.

Oatmeal, Barley have high fiber content and have been shown to reduce the risk of Cardiovascular Disease.

Lose your weight such that the BMI (Body Mass Index, calculated by weight in kg divide by height in meter squared) is less than 30.

An estimated 153 million people are affected by Ischemic Heart Disease Worldwide [1]
Males are more affected than females (86 .4million and 67 million respectively) [1]
Caused 9 million deaths in 2016[1]
Predicted to become the most common cause of death by 2020